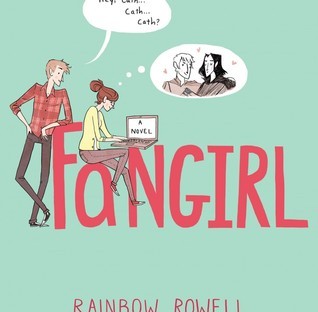 But for Cath, being a fan is her life — and she’s really good at it. She and her twin sister, Wren, ensconced themselves in the Simon Snow series when they were just kids; it’s what got them through their mother leaving.
Reading. Rereading. Hanging out in Simon Snow forums, writing Simon Snow fan fiction, dressing up like the characters for every movie premiere.
Cath’s sister has mostly grown away from fandom, but Cath can’t let go. She doesn’t want to.
Now that they’re going to college, Wren has told Cath she doesn’t want to be roommates. Cath is on her own, completely outside of her comfort zone. She’s got a surly roommate with a charming, always-around boyfriend, a fiction-writing professor who thinks fan fiction is the end of the civilized world, a handsome classmate who only wants to talk about words . . . And she can’t stop worrying about her dad, who’s loving and fragile and has never really been alone.
For Cath, the question is: Can she do this?
Can she make it without Wren holding her hand? Is she ready to start living her own life? Writing her own stories?
And does she even want to move on if it means leaving Simon Snow behind? – From Goodreads

BFF?: Cath… where do I begin with this girl?! On the one hand, I kind of adored her sense of quirk, the way she couldn’t quite handle college and “being out there,” her naivete. But on the other, those things sort of drove me insane. I mean, look. I’m not the most socially adapt person out there and God knows when I was 18 I was about as awkward as a 3 legged spider. But… I actually joined the world. Anyway, not gonna get on how Cath and I are different. I think what I truly truly loved about her is that she was passionate. Sure, it was in something 99% of the world doesn’t get, but so what?! This girl knew what she loved, followed her passion, and hell… made something of it. Even though really it didn’t “get” her anywhere, it opened up this world that she actually felt a part of. And I think that sense of being a part of something helped, in some way, to open her up to other things. Or at least people.

Readability: It’s no secret that I LOVE Rainbow Rowell’s books… and this is only the second one I’ve read! Her writing is natural and easy to get into without feeling like we’re being cheated of depth. My ONLY complaint – and really, not so much a complaint – is the periods of fanfiction that were included. I actually really enjoyed it and, had it really been fanfiction from a real book series, I probably would have read it. But, I just wanted to get back to more Cath and Levi cuteness. 🙂

Crush Level: 8
So Levi. Let’s chat about him for a hot minute. He was… well… he was not the kind of guy I dreamed about when I was in college. Well, maybe not looks and such wise… personality wise though? Yes. A million billion times yes. Seriously though ladies… And I’m talking to you college aged ladies… and, maybe you HS gals if you’re listening… THIS. THIS IS THE BOY YOU NEED TO FIND. Stop looking for love in the wrong guys, the ones who think it’s okay to get you drunk and take you back to their place, the ones who want you to “just come over and help with math homework.” Listen, this is bullshit. Find a guy who argues with you over carrying your laundry. Find a guy who will stop what he’s doing and drive 2 hours to take you home in an emergency. Find a guy who will bring you a Pumpkin Mocha Breve JUST BECAUSE! Seriously though… there are crushes and then there are CRUSHES… Levi is the latter. Find you one. And… if he has an older brother with the same set of delicious morals, send him my way.

I’m pretty sure you saw this coming… I may start fangirling over the fanfiction in Fangirl. (ha) I totally love the idea of fanfiction and, for a rather longer brief period, I was completely enraptured with it. At first it was Twilight and Harry Potter, then I moved onto Narnia and Hunger Games. Needless to say, fanfiction was HUGE in my life during a period. I also wrote a bunch of it, so I got where Cath was coming from. I felt like it created a connection between the two of us!

Despite the fact that Wren was kind of an asshat to Cath a good amount of time, I loved that here were two twins who had been basically the same person their entire lives but were now separating to become their own person. On the one hand, I hated it for Cath that Wren wanted to room with someone else, live in a different dorm, do her own thing. I hated that Cath felt like half of her was missing. But on the other hand, it made me realize that there’s a huge need for this separation, especially as twins get older. It was kind of eye opening.

Commencement Speech: Like Eleanor & Park, I started Fangirl with this idea of “Oh, this is going to be the cutest book ever!” I mean, a freshman in college who has an obsession with fanfiction? How can this NOT be cute?! And I mean, don’t get me wrong, it totally was. But, like Eleanor & Park, it was SO. MUCH. MORE!

There are so many twists and turns to this book, so many things that made my heart wrench. It wasn’t just about a girl who liked fanfiction; it was about a girl who had serious issues. Not… because of the fanfiction. For me, this book really struck a cord because in some ways I felt like I was a lot like Cath – scared, nervous, worried, hardened. It was hard seeing these traits on the pages of this book and I wanted to intervene with Cath, to help her and hold her hand.

Something that made this book unique for me was the embracing fanfiction. For those of us who do/did write it, it can be a little embarrassing or something we’re ashamed to admit. I loved that this book brought it into a new light and gave examples of just how unnerdy it can be. But, it also challenged writing it – not really from an ethical standpoint but from a “these aren’t your characters wouldn’t you rather use your talent to create your own?” kind of way. I loved that challenge!

Yearbook Quote: “Feelings are like three-year-olds. They’re not rational. They’re just there.”

Check out what the rest of The Selective Collective is up to today!

10 thoughts on “Please excuse me while I fangirl”