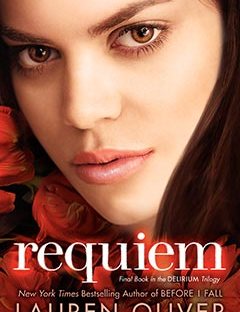 Now an active member of the resistance, Lena has transformed. The nascent rebellion that was underway in Pandemonium has ignited into an all-out revolution in Requiem, and Lena is at the center of the fight.

After rescuing Julian from a death sentence, Lena and her friends fled to the Wilds. But the Wilds are no longer a safe haven. Pockets of rebellion have opened throughout the country, and the government cannot deny the existence of Invalids. Regulators infiltrate the borderlands to stamp out the rebels.

As Lena navigates the increasingly dangerous terrain of the Wilds, her best friend, Hana, lives a safe, loveless life in Portland as the fiancée of the young mayor. Requiem is told from both Lena and Hana’s points of view. They live side by side in a world that divides them until, at last, their stories converge. (from Amazon)

BFF?: We’re back with Lena and joined by her former friend Hana… You know what? I just can’t with this book. I’m skipping all the normal stuff and just writing what I need to say about it.

I’d like to say that I’m a huge fan of this series. I think it’s beautiful, poetic, heartfelt, heart ripping, and just plain wonderful. I’ve loved the world Oliver has created and the characters she’s brought to life. They’ve been thoroughly well-written and well-loved. My heart has been broken and pasted together so many times through this series, first with Alex, then with Hana, then with Lena herself that I really just needed a win for them, you know?

Like so many others, I was pretty terrified to read Requiem, not because I didn’t want the series to be over, not because I was worried that it might be a let down, but because I was scared at just how hard my heart would break at the end. While reading Requiem I felt like I forgot what my thoughts were from the previous books, so I reread my reviews of Delirium and Pandemonium. Apparently I loved Alex and Julian equally, so I knew whatever the outcome of Requiem, my heart would break for one of them. My heart would break for Lena. I just did not see this being a “and then they rode into the sunset together and live happily ever after” kind of ending. This series has not been that kind of series.

When I first read Delirium, I literally threw the book across the room when I finished it. WTF kind of ending was that?! My heart, I cannot even describe what it felt towards the book. It took me a while to come to terms with it, and that really only happened after reading Pandemonium. This series has twisted me up like very few have… to the point where I don’t even know if I truly enjoyed it.

But then came along Requiem. All through it I thought just how much I wanted Lena to be with Julian, how wonderful he was to her, how shitty Alex was being… I hated Lena a little bit for pining after this boy who was acting like a tool and just stringing along this perfectly wonderful boy who clearly loved her. I HATE THIS IN BOOKS! Anyway… I knew the outcome of this book would surely show Lena picking Alex over Julian and me being uber disappointed.

Skipping over the love part, I wanted this big DESTROY THE SOCIETY scene, where we finally get to tie up ends and take down the man! Yeah! And… it just didn’t happen. I mean, it did… but it didn’t. Basically, the ending just reminded me of when the Berlin Wall came down and David Hasselhoff dancing on top of it. All this lead up and we didn’t even take down the government? What kind of dystopia are you?!

One shining moment though was Hana’s ending. Like I seriously loved it and wanted to high five her. Repeatedly. It was just so awesome, so HANA!

That, however, isn’t going to fix just how… ugh, I can’t even put into words how pissed off I am about this book and its ending. It wasn’t even an ending. It was a total cop out non-ending. I turned the page, thinking there was more, only to find a sneak preview of Oliver’s newest novella? I flipped back and forth, thinking maybe I missed something? No? WTF!