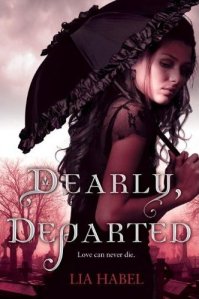 The Skinny: Nora has just come out of mourning for her father when she is kidnapped from her home in New London, a futuristic Victorian city, by zombies. But these are good zombies, trying to save her from the bad zombies. Nora discovers the secret world that the zombies have created, covered up by her own government, and begins to understand that the battle between the New Victorians and the rebel Punks is only a tiny part of her world’s problems. She becomes closer to the zombie army’s captain, Bram, and with him battles to discover the truth about a secret vaccine, created by her own father – who is a zombie.

BFF?: If I could choose to be BFFs with anyone during a zombie-pocolypse it would be Nora Dearly. Raised in a Victorian world – big dresses, manners, polite-society – she’s definitely has a culture shock when she enters the zombie army’s base and realizes what they are. At first I kind of thought she wouldn’t be able to handle this and was going to be a damsel in distress kind of annoyance. NOT SO! Nora immediately wanted to learn how to kick butt, uncovered this great brave side and became one of the most admirable characters in this book. Would I want her to be my BFF? Hells yes!

Breakout BFF: Pamela. At first I didn’t so much like her. I thought she was sort of yawn, but then she got pretty kick butt. Pamela was the scholarship kid, a poorer family who had lofty aspirations for their kids, so I just didn’t feel like I connected with who Pamela really was for most of the book. It wasn’t until she was faced with absolute danger – in the form of a zombie-pocolypse – that she was able to push behind all her proper education and inferiority complexness and become who she was really was supposed to be – a kick butt zombie fighter who has major inner strength.

Readability: As much as I loved this book I didn’t love reading it. I’m not a huge fan of chapters told from different character’s perspectives – ie multiple narrators – so when I realized this one was told from 5 different perspectives I inwardly groaned. Each of the perspective was very well written and the voices great reflections of each of the narrator characters. I have no complaints with that. It’s just that I got attached to certain characters so when it wasn’t their turn to narrate I found myself rushing through other characters’ chapters so I could get to the ones I wanted to read.

Crush Level: ……..7?
Bram was genuinely wonderful. I found myself many many times falling for him, just as Nora did. He was kind of bad ass as a captain, authoritative and stern… but then he’d turn wonderful and caring with Nora. He does this thing where he sits outside her room and lets her ask him questions in order to get her to trust him… so sweet! Oh, and when he kisses her neck… I nearly forget that HE’S ABOUT TO FREAKIN BITE HER BECAUSE HE’S A ZOMBIE! I just couldn’t get over that he was a zombie. I mean, maybe because I keep imagining him as one of Michael Jackson’s backup dancers but I just couldn’t imagine him being hot.

Another note: I never understood Belle’s attraction to the Beast either.

By now you probably know my fascination with zombies. They really are the scariest bad guy out there. But as a good guy? Like one you can smooch on? I think I’d prefer a vampire for that.

As a little girl I loved the Victorian era with its goodness and prudery. Nora grows up in this “new Victorian” age where it’s set in the future but they live like people of the Victorian age. It gave the setting a very neat and classic feel which I enjoyed very much.

I feel like this book combines every genre of YA I love. Dystopian. Historical. Zombies. It’s one big melting pot of genres that’s been poured out and just works. It was funny to read how one minute their strolling down the street with a parasol and the next they’re talking on a cell phone or chatting online.

Commencement Speech: Be warned: this book is probably not for everyone. I, on the other hand, love a good tingly romance and zombies, so it was right up my alley. As I mentioned earlier, I had a hard time getting over the fact that Bram was a zombie, but then I started imagining him as a yummy alive hottiepants and I was able to get through. Because Bram is seriously super wonderful. I love the fact that in Habel’s acknowledgments she starts out by saying “This book is pretty much the accomplishment of my life. I never expected that a story that started off as a joke would get me this far.” This book feels like a total joke in that the combinations of genres are so far out there that it works so well. I loved how new and fresh this book is and I’m really excited about its sequel, Dearly, Beloved.

Superlatives – Most Likely to Wear a Bustle while Fighting Zombies

8 thoughts on “We are gathered here today to fight zombies”