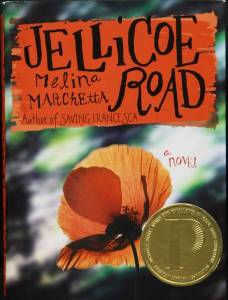 The Skinny: Taylor Markham was abandoned by her mother at a 7-11 when she was eleven. Now seventeen, she is the reluctant leader of both her boarding school House and of the “war” between the boarding school, the Townies and the Cadets. When her closest friend and mentor, Hannah, suddenly goes missing Taylor finds herself alone, left to run the boarding school’s war, take care of new younger students and deal with secrets that continue to lead her to her past. Oh. And there’s Jonah Griggs.

BFF?: The jury is still out on on Taylor and me being BFFs but I loved Taylor Markham as a protagonist. She, like I’m guessing so many of Marchetta’s characters are, is so real it’s ridiculous. Taylor is a little rough around the edges, but not in a way that’s bothersome. There’s something about her that’s not quite mysterious but you don’t really want to explore too deep because you know she’ll be set off and kablooey! I felt like I related to her on this level because sometimes I get all “gar, I’m moody don’t talk to me or I’ll bite your head off and then cry like a crazy person.” Of course, I think Taylor takes this to the next level, but unlike her I’ve never been abandoned by my mom or witnessed someone killing himself. So I think Taylor’s excused.

Readability: I was confused for like 65% of this book. There were moments when I just thought “okay, everyone has been going on and on about this book and it sucks!” Thank GOD I persevered and finished! Because it most definitely did not suck. Marchetta let us into the story just enough to hook you, then let you go… hook, let go. There are tiny snippets of mystery that keep you dangling and.. okay, what’s with these fishing references? Other than my moments of sheer confusion and having to reread passages, it read very well.

I know, I’ve never given a 10 to anyone (at least I don’t think I have…) but Jonah Griggs really needed it. He may not be the most romantic or the swooniest; he may not say all the right things and make your heart melt; he may not even be the most attractive guy in the room. But there is something about him that draws you in and makes him irresistible. I think, for me at least, it’s that he’s real. I’ve been in love with this guy before. Heck, I AM in love with this guy. Forget romantic blah blah blah; have a guy say “I’m here because of you. You’re my priority. Your happiness, in some fucked way, is tuned in to mine. Get that through your thick skull. Would I like it any other way? Hell, yes, but I don’t think that will be happening in my lifetime” and I’m pretty sure I’ll melt.

In my own writing I’ve done flashbacks and LOOOOOVVVEEE writing them. So when I get to read them I get crazy excited. The flashback story in Jellicoe Road is, I’m guessing, pieces of Hannah’s manuscript of the tales of these 5 kids who lived near the Jellicoe Road.

As an American who went to public school, the only experience I have with boarding school houses is Harry Potter. Clearly, like every other American who went to public school, this sounds like the coolest thing ever. While there’s not a sorting hat in Jellicoe Road, the basis of these houses are the same… a group of kids who look out for each other, act as a family, and genuinely care about their housemates.

Capture the Flag to the max

So, the ‘war’ that goes on between the boarding school, the Townies and the Cadets isn’t exactly capture the flag so much as it is all out war. Peace treaties, negotiations, hostage situations… I mean, this shizz is intense!

I don’t know if it’s the fact that I’m going to see Wicked next week or that it’s one of this season’s hot new colors or that I just realized I love them, but there is a kind of sweet side story dealing with poppies that you kind of miss but then remember it… you know, right before you’re about to hit “publish” on this post.

Commencement Speech:This was a tweet I tweeted while reading: Reading Jellicoe Road. There may be tears at some point tonight. #shakesfistatmelinamarchetta

There was some major tears and major fist shaking after finishing Jellicoe Road. Once again, Marchetta managed to not only capture exactly a true teenager’s voice but she captured everything that I am and showed me myself in Taylor Markham. I don’t know if it’s a trend with her books (will have to read more to find out) but I love the fact that her writing deals with the character, not with events. There wasn’t really any major action or plot; you don’t see a lot of build-up to this huge scene and then a crescendo to a happy ending. This book isn’t about those things; it’s about Taylor Markham finding who she is and what her place is in the world. It’s about learning to deal with your life and handling it. So often we’re presented with happy endings, which are great, but it’s even better to just be presented with an ending. I don’t know what’s going to happen to Taylor and Jonah, but at the end of the book… I didn’t care. I think it takes a very powerful storyteller to end a book with hundreds of loose ends and only a slight glimmer of hope. Put simply: Melina Marchetta is a powerful storyteller.

Oh… and there was Jonah Griggs.